When in Doubt, Raise it Now – Claims On Habeas Review Ruling

Having experienced trial counsel is of the utmost importance when facing criminal charges. Okay, I think everyone already knows that, but it’s more important now, than it’s ever been.

Last month, the United States Supreme Court handed down a decision on a case it heard in December 2021: Shinn v. Martinez Ramirez. The Court ruled that federal courts may not consider claims on habeas review that were not raised in state court proceedings.

This decision effectively overrules precedent, which was reaffirmed just ten years ago. In Martinez v. Ryan, decided in 2012, the Court held that a federal court may consider a habeas petitioner’s substantial claim of ineffective assistance of trial counsel, even if it was not presented in state court, if the State barred the petitioner from asserting that claim until state postconviction proceedings, and the petitioner’s counsel in those proceedings was also ineffective. In that case, the Court determined that the petitioner is not at fault for any failure to bring a trial-ineffectiveness claim in state court. Despite this recent precedent, the Court does a 180, saying that such petitioners are at fault for any failure to bring an ineffective assistance claim in state court.

In order to understand what this decision means, it is necessary to look at the procedural defects that got this case to the Supreme Court. First, the respondent Barry Jones was appointed trial counsel that failed to undertake even a basic investigation, and as a result, readily available information that contradicted the State’s case was not uncovered. Thus, the jury never heard any of the contradictory evidence, and Jones was found guilty and sentenced to death.

Still seeking relief, Jones pursued a federal habeas case. The District Court held an evidentiary hearing where they allowed Jones to present evidence that directly contradicted the State’s case; evidence his trial counsel failed to introduce. The District Court concluded that Jones’ trial counsel and postconviction counsel were ineffective. Because of these two layers of ineffective assistance, the District Court held that Jones could raise his claim for the first time in federal court under the Martinez precedent.

The District Court found Jones’ claim credible, stating there was a “reasonable probability that the jury would not have unanimously convicted Jones of any of the counts” if Jones’ trial counsel had “adequately investigated and presented medical and other expert testimony to rebut the State’s theory” of Jones’ guilt.

Defending its conviction, Arizona appealed the District Court’s decision and argued that 28 U.S.C. §2254(e)(2), part of the Antiterrorism and Effective Death Penalty Act (AEDPA), barred the District Court from considering evidence that was not part of the trial court record. The Ninth Circuit Court of Appeals affirmed the District Court’s decision. The Ninth Circuit recognized that claims of ineffective assistance often require investigative work and the presentation of evidence which is not in the trial court record. Jones’ case (along with a companion case with similar procedural defaults) was then picked up by the Supreme Court.

The underlying principle of prior Supreme Court precedent is quite simple. If a defendant has legitimate claims for ineffective assistance of counsel both at trial, and in post-conviction review, then they may raise their claim for the first time with a federal court. This should make sense. After all, the defendant should not be penalized for the ineffectiveness of their counsel. However, that is no longer the case as the Court sided with the State of Arizona, and gutted precedent in place to safeguard against these procedural defaults.

Here, we have a majority opinion that focuses on a particular provision of AEDPA which they interpret as barring a petitioner from presenting evidence not found in the record because they have “failed to develop the basis of their claim.” The inherent issue with this line of thinking is that an ineffective assistance claim is almost always going to lack an evidentiary record. Presenting evidence NOT present in the court record, which should have been introduced, is often the only way for a petitioner to develop their ineffective assistance claim.

In her dissenting opinion, Justice Sotomayor points out that ineffective-assistance claims frequently turn on errors of omission: evidence that was not obtained, witnesses that were not contacted, experts who were not retained, or investigative leads that were not pursued. If a defendant is not allowed to present outside evidence, their habeas review will be doomed from the start.

Justice Thomas’ majority opinion turns on this idea that AEDPA’s purpose is to ensure that federal courts “afford unwavering respect” to state court proceedings. There may be some truth to that statement. AEDPA was designed to ensure state-court rulings are accorded proper finality and respect. What it does not do is make these state-court decisions untouchable. Justice Sotomayor aptly points out that the legislation is intended to strike a balance between state and federal courts.

The majority tries to paint a picture of an undermined state-court system and overwhelmed federal courts if petitioners are allowed to present outside evidence during a habeas review. Data shows that this is an unfounded claim, and the lower federal courts have been managing the limits of the Martinez precedent for a decade.

Even if permitting outside evidence led to an increased burden on the federal courts, is it not more important to be certain a defendant has been properly sentenced instead of an innocent person facing imprisonment, or death. 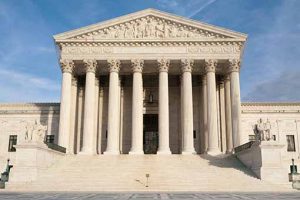 Here, the Supreme Court was presented with two death penalty cases where each had two federal courts finding ineffective assistance of counsel. That means those federal courts were presented with evidence that lead them to believe there was “a reasonable probability” that the jury would not have unanimously convicted them on any of the charges. Both of these men were able to raise these concerns only because they were permitted to present outside evidence. Thus, the Supreme Court has decided that it is more important to “respect” the decisions from a state court rather than ensure someone on death row is actually guilty, and provided proper constitutional safeguards.

In this situation, both of these men were appointed counsel who failed to meet basic standards of trial advocacy, not once, but twice. The State of Arizona then contends that AEDPA bars the federal courts from considering new evidence to overcome the procedural default, citing that the petitioners gave up their right to bring such a claim because they failed to do so in post-conviction review. Thus, instead of re-trying the cases and providing effective counsel, the State pursued their argument that the petitioners were simply barred from presenting new evidence to support their ineffective assistance claims.

Ultimately, the majority opinion finds the defendants “failed to develop the record” to sufficiently make a claim for ineffective assistance. That begs the question: how does a defendant develop a sufficient record if they are not being properly represented? The short answer is that they don’t. Defendants rely on their counsel to act on their behalf and defend them to the best of their abilities. Defendants should not be expected to be in charge of developing their own court record for use on appeal.

That is why this decision is so shocking. Under the veil of efficiency, the Court decided it is willing to risk sentencing an innocent person to death. By not allowing a defendant to present outside evidence in these situations, their sixth amendment right to effective assistance of counsel becomes illusory at best. Because these defendants were so unlucky as to receive ineffective assistance twice, the Court places the burden of a system failure on their shoulders. This decision has made it abundantly clear that you need experienced trial counsel to defend your case, or you could end up falling victim to procedural defaults.