Crack cocaine possession charges and crack dealing charges are serious offenses, and those charges can face stiff penalties. Crack is a form of the drug cocaine that has been processed and transformed into a more potent, smokable, “rock” form. The name refers to the cracking sound heard when the rock is heated and smoked. Under Ohio law, crack, or cocaine base, is treated identically to cocaine in relation to sentencing. Therefore, possession or trafficking of crack cocaine in any amount is a felony punishable by a possible prison term. But small amounts, under 10 grams, are usually felonies of the fourth and fifth degree and offenders normally get probation under Ohio law. Of course, judges can always send crack dealers to prison especially if evidence exists suggesting the offender is a major dealer.

Unlike state law, the United States Sentencing Guidelines, used in Federal Court, create a significant disparity between “powder” and cocaine base by treating crack much more severely than cocaine. For example, a person who is charged with selling or possessing over 280 grams of crack or roughly 10 ounces faces a possible sentence of 97-121 months even if the offender has no criminal history. To reach this same level with cocaine, i.e., a sentencing range of 97-121 months, one would have to possess or sell 5 to 15 kilograms.

Because crack is a largely cash business and dealing is done at the street level and out of homes, dealers often possess firearms to protect their cash and likewise prevent them from being robbed. As such, if a crack dealer possessed a firearm the Federal Prosecutors will almost always charge in addition to the drug offense a violation of 18 U.S.C. § 924(c). This section makes it unlawful to possess a firearm during the commission of a drug trafficking offense. If convicted of a § 924(c) count, then the offender receives a mandatory sentence of 60 months in addition to the time received for the underlying drug offense.

It is crucial for lawyers representing drug offenders charged with § 924(c) counts in Federal Court to negotiate a dismissal of that charge. This is especially true in cases involving crack cocaine as the sentencing under the Federal Guidelines is already harsh if not draconian.

As one can see, the penalties for possessing and dealing crack cocaine are serious offenses under both Ohio and Federal law. The Federal Sentencing Guidelines are complex and many ways exists for an experienced attorney to reduce your potential sentence, because of this, any person investigated for or charged with a crack related offense should immediately contact an experienced Federal Attorney & Columbus Criminal Lawyer. 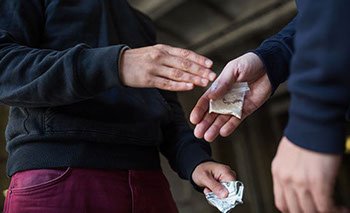